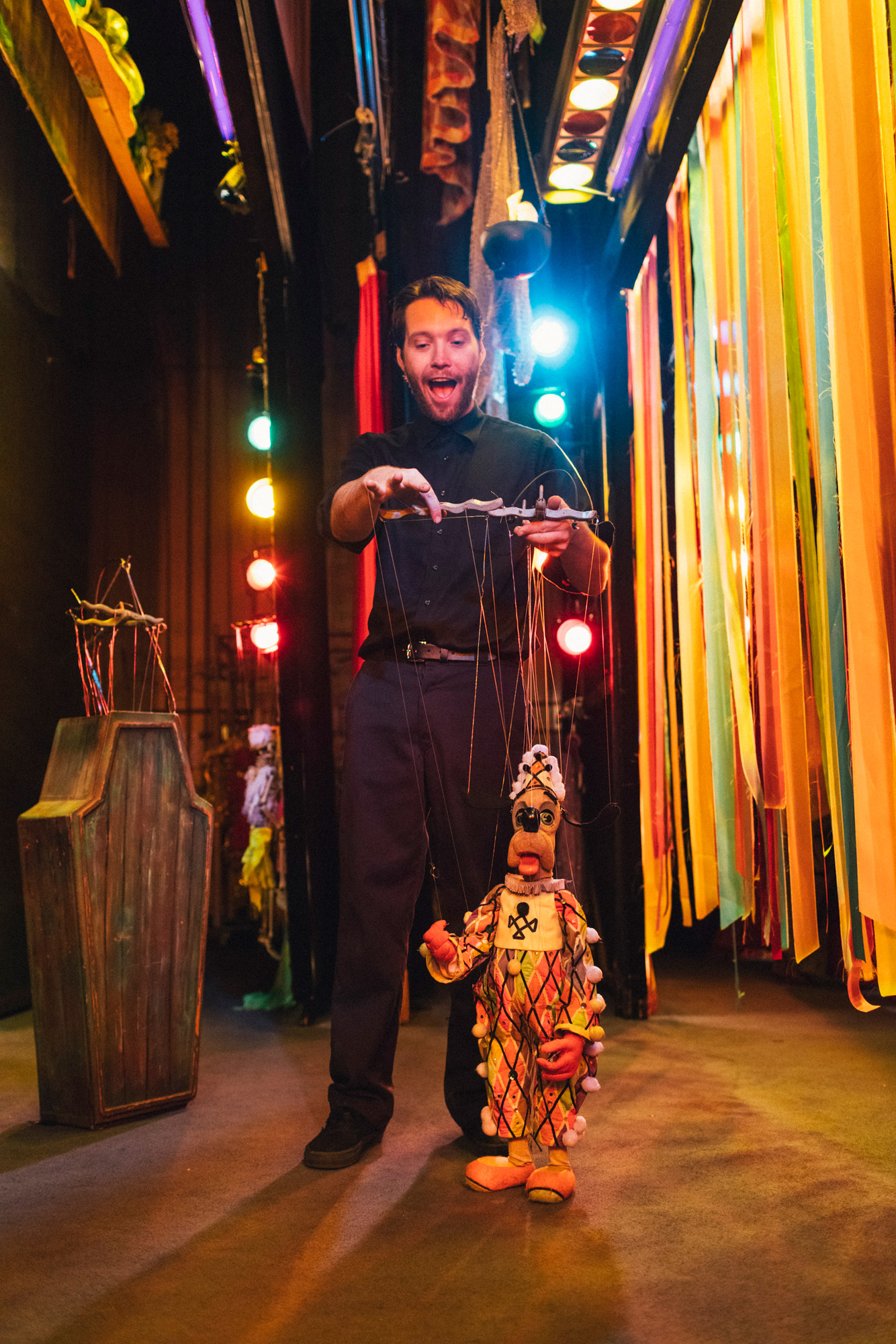 We love Bob Baker Marionette Theater! And we love having them here!

We also adore their terrific executive director and head puppeteer, Alex Evans. And to learn more about our fine friend, we asked him about his history and connection to the theater. And of course, we’re sharing it here with you, our fellow Bob Baker pals!

OC: How long have you been with Bob Baker Marionette Theater?

I have proudly been at the theater since 2007! I started as a volunteer, interested in special effect work with not much of a background or even interest in puppetry. But I Googled Los Angles puppets and “Bob Baker” came up. I went down to see a show, and my mind was blown! I have been tangled up ever since.

OC: What, or should we say who is your favorite marionette? Why?

I have sooo many favorite puppets! There are 2000+ and 100+ per show, all with their own character and fun elements and history. If I had to choose, I would say Jack Frost, who is this elegantly dressed (with 100’s piece of intricately cut cloth, that glimmer like snowflakes). HIs character is in the sculpt of his face, fingers and shoes. And really most of all, he’s just fun to make move – he skates around as if the ground is ice, he is agile, beautifully weighted – it’s just fun the do that number!

OC: Did you know Bob? What do you remember most about him?

I did know Bob very well. When I started, I spent a lot of time with him in the library helping him pull music and put soundtracks together. He was very blown away by my ability to pull up songs with a few clicks of my computer, whereas he would spend a large amount of time pulling from old show cassette or albums. What I remember most about Bob was his ceaseless imagination – up until the last minute he was thinking of ways to use coffee cans, flowers dancing, lighting design and so much more. His imagination and creativity never stopped!

OC: Do you remember your first performance? When was that?

My first performance was during a special event, Charles Phoenix’s “This is Your Life” tribute to Bob. I think I stepped on a puppet during the show – I remember not really knowing what I was doing and being shocked they would allow me to be a part of it!

OC: What would you like people to take away from your shows?

The true goal of the theater is for the audience to take away the magic that Bob took away from a show some 80+ years ago when he saw his first puppet show; a feeling of empowered imagination and creative expression. Puppetry is such an accessible art form, which can be done with anything from socks to ridiculous, expensive hand-crafted materials – in that spectrum there is a world of ways to express yourself and any story you want to tell. You can be abstract or realistic, silly or serious; with puppetry everything is possible. I would love people to take away a feeling that everything is possible.

We’re also bringing them back in December for a Holiday Show… so stay tuned!